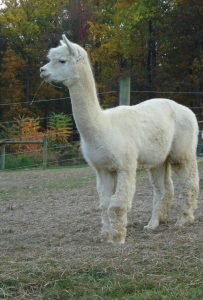 In Memory of
Peruvian Ace of Heart

As an alpaca owner we are always worried about that darn little worm that can migrate into the alpaca and cause damage to the central nervous system or result in death. That worm is know as the meningeal worm and is hosted by the white tail deer. In PA, we certainly have lots of white tail deer running about about therefore protocol calls for deworming of our alpacas. Here at Quarry Critters Alpaca Ranch we use Dectomax every 6 weeks and we have Guinnea Hens. Guinnea Hens are a pea fowl that eats this snail and their eggs/larva. Another dewormer often used alternatively is Ivermectin.

Here are some other means of prevention:
* Ideally alpacas should not graze in the same pasture as the white tailed deer.
* Placing a deer proof fence may offer some protection, but that would be a 12 foot high fence of
woven wire not high tensile fencing.
* eliminate organic matter. Snails and slugs prefer dark, damp areas therefore these pests will gather
around the leaves, buildings, wood piles, compost, etc. It’s a good idea to keep pasture and areas
around the barn clean.
* placing gravel or limestone around the fence lines can help to reduce migration of these slugs
into the pasture.
* Fowl such as Guinea Hens will help decrease snail and slug population in the fields
* Use of dewormers are recommended such as Ivermectin every 30 days or Dectomax every 45 days

Make every effort to know the prevention and be diligent in your management to reduce risk and maintain a healthy meningeal worm free herd.

I’m so sadden at the lose of our favorite herd sire Peruvian Ace of Hearts. Yes, he was infected by the meningeal worm. We first noticed lost in weight. Then he stopped following us around eager to eat, and stopped eating. We called the vet and got lots of help and meds. This helped his spirits and his appetite returned. He was his old self again except he wasn’t using his legs. We work physical therapy on his legs twice a day in an an attempt to keep the circulation moving. The vet loaned us a hoist to help lift him so he
would be able to put pressure on his legs. This was incredibly helpful. He fought a good fight. He stayed true to the end. May 12, 2014 at age 10 Ace passed away.

Ace is survived by many fine off springs both male and female. He was able to produce many colors but his favorite color was medium fawn. His EPD put him in the top 1% of the American herd for his fine crimp. Ace participated in alpaca shows such as 2005 Empire Show and placed 5th out of 12 white yearling males, 2006 was in the North American alpaca Show and placed 6th. He was also known for his incredibly dense blanket.

Ace was loved by all and will be missed.